Posted by gregole on February 24, 2015
Posted in: Uncategorized. Leave a comment

Dark matter interests me – and this is a great post. So there’s this certain something out there, that just has to be there, made up of stuff we can’t understand at all. Amazing how much we know; and how much we don’t.

This post is about dark matter and is the latest in my series on cosmology, the study of the origin and evolution of the Universe as a whole. As readers of my previous posts will recall, dark matter makes up about 27% per cent of the mass of the Universe. 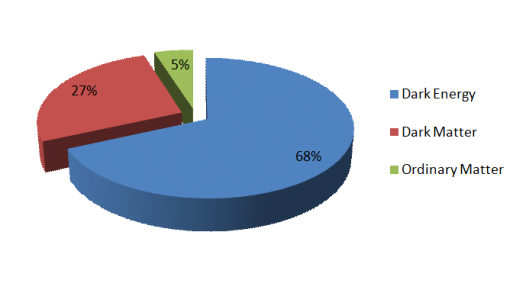 Our solar system contains the Sun, eight planets with their moons and various minor bodies such as dwarf planets, comets and asteroids. If we plot the speed that each planet orbits the Sun against its distance from the Sun, then we get the curve shown below.

The graph above shows the speed at which the planets orbit the Sun in kilometres per second, plotted against their distance from the Sun in astronomical units (AUs). 1 AU is just under 150 million km and is the average distance between the Earth and the Sun.