Look on a map of the State of Arizona and in the lower right hand (southeast) corner is a highway running north from Morenci to Springerville – Highway 191 and this approximately 90 mile stretch is the curviest road in the United States.  I’ve wanted to ride a motorcycle on this road since before I owned a motorcycle, and this last weekend made a reconnaissance in the SUV.  And now I’m here to tell you about it.

Here’s a good blog post from a motorcyclist’s perspective:  http://excessivelocity.blogspot.com/2009/05/arizona-191-old-666-devils-highway.html

And believe me, I do want to ride my Triumph Bonneville T100 up that road – it’s just that the place has an aura of fascination, and I wanted to be able to explore it just for its own intrinsic interest first, so when I’m on the bike I’ll have a sense of where to explore and how to plan the ride.  So with my lovely lady Lali as navigator, and my dogs Gremlin and Dali for security detail, we departed Saturday morning.

It used to be called Highway 666 but was changed to Highway 191 at the request of Arizona department of highways so that’s probably why it’s referred to as “the Devil’s Highway”:

In 1992, Arizona requested a new number for its portion of US 666,[5] arguing the road signs on this highway were the most frequently stolen in the state.  https://en.wikipedia.org/wiki/U.S._Route_191

The overall trip was planned as a Saturday morning departure, and a Sunday afternoon return and we stuck to that schedule.  For each destination on the trip, since it was a recon mission, we recorded Destination / Time / Elevation (in feet) / Temperature (degree F) / Mileage; and I’ll stick to that format here.  So since we departed Tempe, Arizona, that would read:

Our trip itinerary was to take hwy 60 east to Superior and Globe and then continue east on hwy 70 to Safford and then hwy 191 north to Morenci and on to Springerville (between Morenci and Springerville is the “Devil’s Highway” portion of the trip).  Overnight in Springerville, and then return home via the Apache Indian reservation (hwy 260 and 73) to hwy 60 south to Globe; then 60 west to Tempe.

And so it was!  Next stop, Superior!

When we arrived at the Superior rest-stop, we were visited by favorable omen, in the form of a Triumph Rocket III:

The Triumph Rocket III is a three cylinder motorcycle made by Triumph Motorcycles Ltd. At 2,294 cc (140.0 cu in) it had the largest displacement engine of any mass production motorcycle, as of September 2010. https://en.wikipedia.org/wiki/Triumph_Rocket_III

A good omen in the form of a Triumph Rocket III

Just looking at that beautiful bike made me hungry; so it was time for a nutritious breakfast at any restaurant with the last three letters, “b-e-r-t-o-‘s”, Arizona residents will know what I mean…we have Filaberto’s, Humberto’s, and in Superior:

Los Gilberto’s – and thankfully, they serve breakfast all day!

We continued to Globe without incident and continued east on hwy 70. 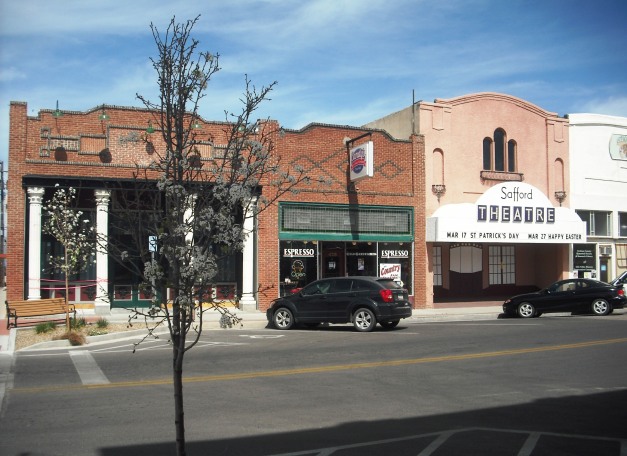 Safford is pretty, well kept and central to many great trips and I’ve been through it more than a couple of times in my wanderings.  It’s strategically located as a starting point for multiple nice motorcycle rides I can imagine, so I wanted this time through, to scout out lodging as a 155 mile ride from my place to Safford is plenty of saddle-time one way.

For example, if instead of picking up 191 northbound, one was to go southbound, you find yourself just outside Mt Graham, an awesome mountain area known as a “sky island”.  A sky island rises from the desert floor in an isolated mountainous area with its own unique flora and fauna – life on the mountain exists as if on an island.  Mount Graham is one of those sky-island ecosystems.  Google it and learn more; but let it be known Safford is a hotel destination for bikers because of its proximity to numerous awesome stuff.

But this time we headed north on 191 out of Safford to Clifton, Morenci, and the Morenci mines.

And like I said, you can also head southbound: 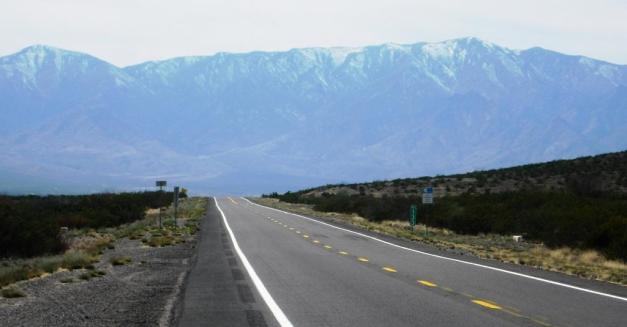 The View Southbound – Sky Island in the Distance…

I don’t want to characterize Clifton as a ghost-town, and I love Arizona Ghost-towns because it’s not really a ghost-town and I don’t want any hate-mail from the Clifton booster club or their chamber of commerce; but, if you want to start a coffee shop or something like that in Clifton, I think there is plenty of retail space available in their downtown.  And it did have a kind of quite charm that is sort of hard to put into words.  Actually it was kind of like glaring sun, and other than the sound of wind blowing, dead silence.

Also note the type of vegetation at this elevation – pretty arid, and dry desert plants.  Rough terrain – I think the place was originally called Cliff-Town.

I don’t know if you are like me in this respect, but many times when I’m headed somewhere I’ve never been, and maybe not a lot of other people have been their either so there’s not a lot of descriptions of the place, and you don’t know what to expect.  You do not have clear expectations.  Now days though, we have Google Earth; enabling you to check out an area ahead of time and form some kind of mental picture of where you are going; but here’s my point – sometimes, even after checking out Google Earth, when you get there it’s still a big surprise.  Well this happened to me in Morenci.

See, during our planning phase, I figured that at about this time in the trip, we would need a Starbucks and I was right, we did.  And further more, by scrutinizing Google Earth, I had actually located one in Morenci, so we went looking for it…and found it!  Suddenly there it was, in a beautiful newish shopping center built on the edge of Morenci!  I mean, it was a really coolly constructed shopping center right there in the middle of nowhere.

I am so grateful for whoever did that and Starbucks was great; someday, someday soon I hope, that happens on Mars.  Can you imagine; you’re on Mars in your rover and you suddenly realize you need a Starbucks…You Google Mars it and there’s one ahead!  When you get there, it’s actually a cool little shopping center with a cinema.  That would rock.

Any way, that happened to us, but we weren’t on Mars, we were in the Arizona desert.

Morenci is home to a series of enormous surface mines.  And I mean enormous.

An Enormous Open-Pit Mine in Morenci 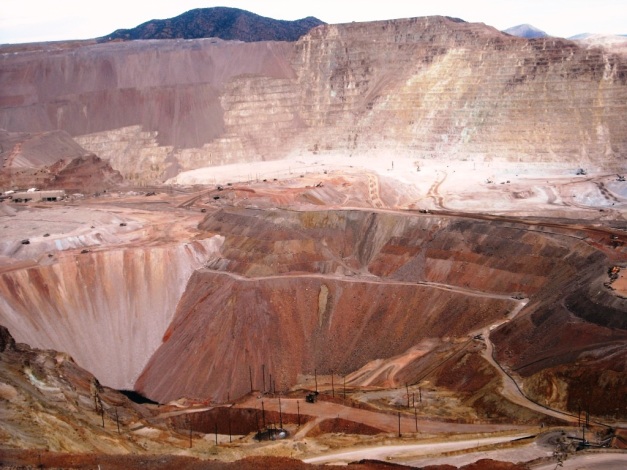 Another Shot of an Enormous Mine Operation

You know, these kinds of things are hard to capture photographically.  You see them with your eyes and you also see the entire horizon but the camera just sees light like through a keyhole – it frames the vista.  Well look closely at about halfway up – see the lines of little black specks?  Those are actually giant rock-hauling trucks and here’s a tire from one of those monster trucks: 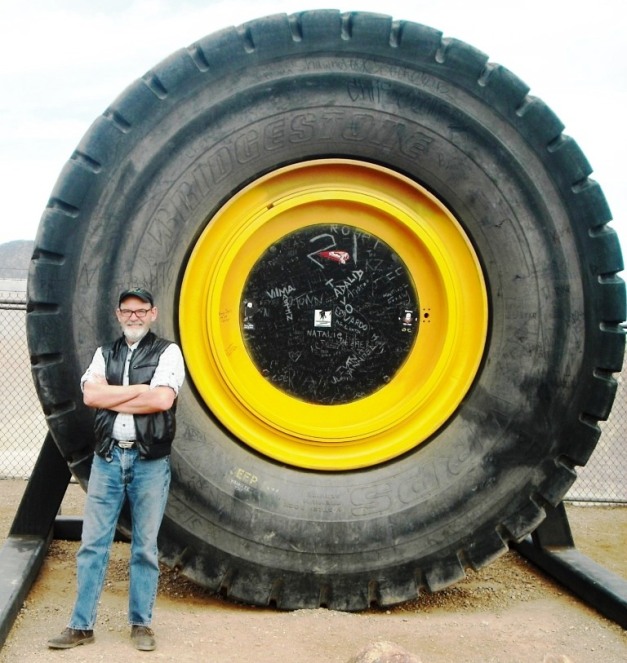 I was utterly fascinated by the mine operation.  I could have hung around all day watching them and trying to figure out what was going on.  Mind boggling scope of operations…

But it was time to move on!

So we proceeded through the tunnel to the famed and fabled Highway 191, the Devil’s Highway.